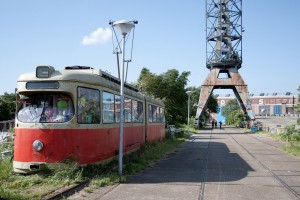 With the Amsterdam based architecture office XML I worked on a comparative study on Olympic candidatures in the fall of 2011, as commissioned by the Ministry of Infrastructure and the Environment and Atelier Making Projects. The study, which compares the various bids by Madrid, Istanbul, Doha and Tokyo for the 2020 Games and the South African bid for the 2024 Games, discusses three themes, Cultural Pride & Marketing, Economy, Infrastructure & Design and Power Geographies, and clarifies the narratives that cities use in their bids, the various spatial concepts for the Games, and the power geography surrounding the bids. In this way, XML provides the first international perspective for the development of a Dutch bid for the Games. In the project XML collaborated with local correspondents in each of the researched cities: Gillian Benjamin (South Africa), Mirai Morita (Tokyo), Selva Gürdoğan & Gregers Tang Thomsen (Istanbul), Todd Reisz (Doha) and Gianpiero Venturini (Madrid).

The study established that existing bids, including the current Dutch proposals, are based on the paradigm of the Olympic Games as a mega-event. As XML shows, however, the Olympics are not a neutral autonomous, immutables event. Olympic history points to cycles of twenty years, in which the Games are closely linked to political, economic and social developments. Each period has a specific paradigm that defines the meaning of the Games and their significance for the times. The study also shows that it is highly probable that the 2028 Games will coincide with the start of a new cycle. Under the heading ‘The Netherlands as Game Changer,’ XML proposes, therefore, that a Dutch bid should not focus on what the Games mean today, but should incorporate long-term global developments and their future ramifications for the Netherlands.

In line with these conclusions, XML has developed three spatial models that show how the Netherlands can host the 2028 Games by effectively responding to these long-term global developments. In the ‘Deltapolis’ model, the two Randstad areas, North Wing and South Wing, are integrated into a single, internationally competitive urban region: the Deltapolis. The ‘Virtual Games’ model is a response to technological developments and the rapid digitalization of society. In ‘Global Games,’ finally, XML proposes a new organizational model for the Games that reinforces international networks and exchange between cities. These visions for the Games, each with a specific narrative, are atuned to long-term global trends (instead of the limitations of current IOC requisites) and show how the Dutch bid can become an effective response to these trends. The visions may be viewed as a design postscript to the comparative study of Olympic candidatures.